What is the Drama Triangle?

Be Strong ~ A Double Edged Sword. 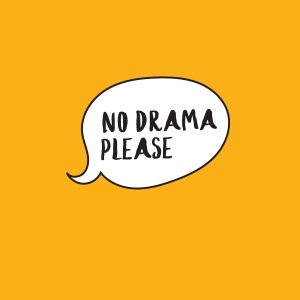 “I just don’t want drama in my life”

I wonder if you have ever found yourself making this statement. I certainly know I have!

That moment in when you are in a conversation with someone and before long, the conversation has turned sour and are now involved in another drama – disagreement – argument – conflict.

This is a familiar position people find themselves in, particularly in those close relationships we have with others – romantic partners, family, friends, neighbours, or co-workers. We tell ourselves that we don’t want drama and arguments and then end up in them, time and time again. A behaviour that you say you don’t want to repeat and yet you do – almost like a habit that you cannot seem to change. Being in this pattern of behaviour can be frustrating and confusing, and it can, at times, leave us feeling shameful or resentful.  Sound familiar?  Rest assured; you are not alone; it was familiar to me before I learned the reasons why I was caught up in yet another drama.

I have chosen to write this month’s blog about drama and what it termed as – The Drama Triangle. Why? Because this cycle of drama is damaging to you and your relationships with others; and I hope that once you have a better understanding of this concept and why drama is happening in your life it will lead to positive change.

The best bit about knowledge of The Drama Triangle is you get to opt out of the drama in your life. That’s right! You hold the power to change the habitual patterns that you have developed over time, creating better and healthier relationships with yourself and with others.

What is The Drama Triangle?

Stephen Karpman conceived this concept in 1968. The Drama Triangle is a social model of human interaction – how human beings interact with other human beings. Its idea is the connection between personal responsibility and the power that exists in the conflict between people, and the destructive and shifting roles people play.

There cannot be one player in a drama triangle; there has to be at least two people involved in this game. The terms player and game are used because essentially that is what it is. It is game that people play on a subconscious level, and the reason for playing it is because each player is getting something out of it – a physiological need is getting met. Each player will feel justified in the roles they play but often not taking on board the damage that it is causing them and their relationships.

The 3 Roles in The Drama Triangle- How you can recognise the characteristics of the 3 roles? And what they can tell you?

There are three roles in the drama triangle:

Before I go further into the 3 roles, there is one thing I would like you to consider, in case you risk going deeper down the guilt, blame and shame road. All of us have unmet emotional needs, to some extent or another; and we all need to have these needs met. Often, we do not possess true awareness of the influences from our past and so we get these unspoken wants and needs met in ways that are toxic and destructive, and often we do not even realise that we are doing it.

The Persecutor – they take a one-up (superior) position ‘I am okay – you’re not okay’. The message that they are expressing is, they are in charge and they need to shift any blame and put that blame onto others. Their behaviours are often bullying, blaming, shaming and critical of others.  The payment for them acting in this way is that they get what they want. The Persecutor needs a scapegoat – they need someone to blame or criticise and to shout at someone. The thing is with Persecutors are they often feel powerless, and they have an overwhelming need to overpower others I order for them to gain power. Their view of the world is that it is a harsh and tough place, and the only way to survive is to be harsh and tough with others. It is difficult for the Persecutor to take responsibility for the way they behave as they behave in ways that protect them from the harshness of life.

The Rescuer – they take a one-up (superior) position of ‘you’re not okay, and I am okay’. The message they are expressing is I know better than you or I am better than you. Their behaviours are fixing, telling, giving solutions when not asked, taking over and martyrdom.  The payment for them is ‘I am needed, I am wanted, and I am liked’. The Rescuer needs someone to rescue. Someone they consider that cannot look after themselves as well as they can.  Someone who they believe needs their advice or help. They often end up feeling put out when they think that their ‘efforts’ are not appreciated. They are your classic co-dependant – someone who prioritises other people needs before their own and they worry and burden themselves with other people’s problems. Rescuers are enabling and overly protective. They live in the hope that if they look after people long enough, they will, in turn start looking after them. They fear being alone or abandoned and try to make people so dependent on them that they cannot leave them. Rescuers deny themselves what they need. In a drama, Rescuers often switch from the rescuing role to the victim role – “I was only trying to be helpful!”.

The Victim – they take the one down (inferior) position of ‘I am not okay, you’re okay’. Their message is, I cannot do things without you. I need your help. They behave in ways by complaining, being helpless, saying sorry, whining and catastrophising.

A victim is someone who has an ingrained belief that they cannot look after themselves, or they feel powerless to take control of their own lives. They need someone to look after them – a saviour – and will actively look for people who are stronger and more capable. The Victim will often feel resentful of their saviour, secretly disliking them as it reinforces how inadequate they feel.

Most of the time, you will start by entering into The Drama Triangle from the same starting block; but once you are in Triangle, your role and the role of your fellow players will switch between all 3, over and over again, as the drama unfolds. The Drama only ends when one or more of the players end the interaction, normally by admitting defeat and taking responsibility for the drama.

Who wins the game of The Drama Triangle?

You may feel like you won and feel justified in the way you acted, but the reality is you have probably overlooked the bigger picture and not taken on board the damage that is has caused to the relationship. You may have fulfilled an unmet physiological need in you but in a toxic and destructive way, not in a responsible or altruistic manner that will give you the healthy rewards from happier and improved relationships.

Can I get off the Triangle?

You can get off The Drama Triangle, but you have to want to stop playing the game. You will have to start replacing unhealthy and manipulative behaviours with genuine and honest behaviours, that meet your needs in healthier ways.

Will this be easy, I hear you ask? Not always. But as I say to my clients, growth takes time, you are not meant to figure it all out in one day and that is okay. It takes practice and there will be times when you fall back into old, trusted ways of behaving – old coping mechanisms. But just because something may not be easy, it does not mean it is not possible.

Final word – You are the keyholder to your life ~ make it the life you want ~ one small step at a time.

Be Strong ~ A Double Edged Sword.

You can find out more about which cookies we are using or switch them off in settings.

This website uses cookies so that we can provide you with the best user experience possible. Cookie information is stored in your browser and performs functions such as recognising you when you return to our website and helping our team to understand which sections of the website you find most interesting and useful.

Strictly Necessary Cookie should be enabled at all times so that we can save your preferences for cookie settings.

If you disable this cookie, we will not be able to save your preferences. This means that every time you visit this website you will need to enable or disable cookies again.